Radiation emitted from the sun is known as ultraviolet radiation (UVR), and reaches the earth in primarily two forms: 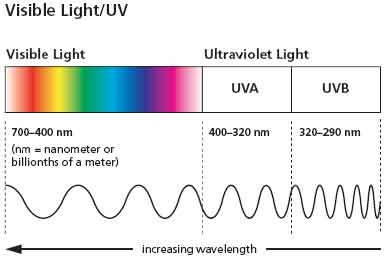 With even shorter rays than UVB radiation, UVC is absorbed by the ozone layer and does not reach the earth.

UVR from the sun and tanning beds damages skin cells, causing genetic mutations that can lead to skin cancer. Both the U.S. Department of Health and Human Services (HHS) and the World Health Organization (WHO) have identified UVR as carcinogenic (cancer causing) to humans. 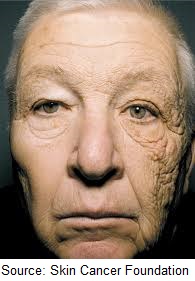 The left side of this life-long truck driver's face shows the damage of UVA passing through the glass of his side window. 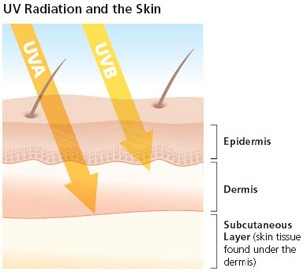 UV levels vary mainly with the height of the sun in the sky. At midday (10-4pm), the sun's rays take the most direct path to earth. In contrast, during early morning or late afternoon hours the sun's rays pass at a greater angle through the atmosphere. Much more UV radiation is absorbed and less reaches the Earth.

UV levels are stronger at locations closer to the equator, where the sun's rays have a shorter distance to travel through the atmosphere. At these low latitudes, less of the harmful UV radiation is absorbed by the atmosphere. 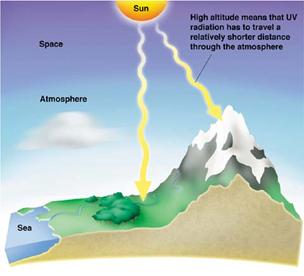 Be careful not to underestimate the amount of UV radiation passing through clouds. While your skin may feel cooler on cloudy days, UVR is not related to temperature. While UV levels are highest under cloudless skies, light or thin clouds filter out very little, and may even enhance UV levels because of scattering. Don't be fooled by an overcast day or a cool breeze!

Many surfaces reflect UVR, making exposure more intense. Be aware of reflective surroundings such as:

Click HERE for information on UV ratings in your area.

Protect yourself from UV radiation, both indoors and out!