Arizona is close to the sun (high altitude), close to the equator (low latitude), and has a warm climate all year. High altitude and low latitude mean less atmospheric protection from damaging sun rays (UV radiation). Plus, a warmer climate means more time spent outside YEAR ROUND with less clothing (short-sleeves, tank tops, etc.) protecting your skin. All these factors have the potential to put Arizona residents at higher risk of skin cancer. 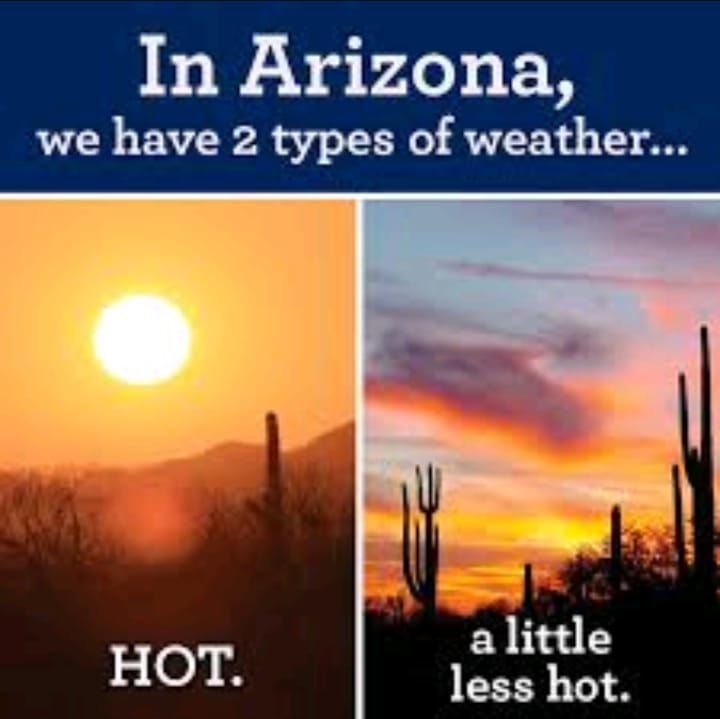 Skin cancer is the most common form of cancer in the United States today. The two most diagnosed forms are basal cell carcinoma (BCC) and squamous cell carcinoma (SCC). These are considered “non-melanoma skin cancers” (NMSC), and as a result, the actual number of cases is difficult to estimate because these cases are not required to be reported to cancer registries. The most recent study of NMSC occurrence in 2006 estimated approximately 3.5 million cases of NMSC, diagnosed among 2.2 million people (1). This is due to more than one NMSC being found in some individuals.  BCC and SCC are usually very curable skin cancers. Almost all are caused by too much ultraviolet radiation (UVR) from the sun and tanning beds. Rates of NMSC in Arizona are presumably high, as we have year-round temperate days, exposing people to potentially excessive amounts of UVR. While the graphic below is from 2015, it clearly shows how common skin cancer currently is compared to other cancers in the United States. 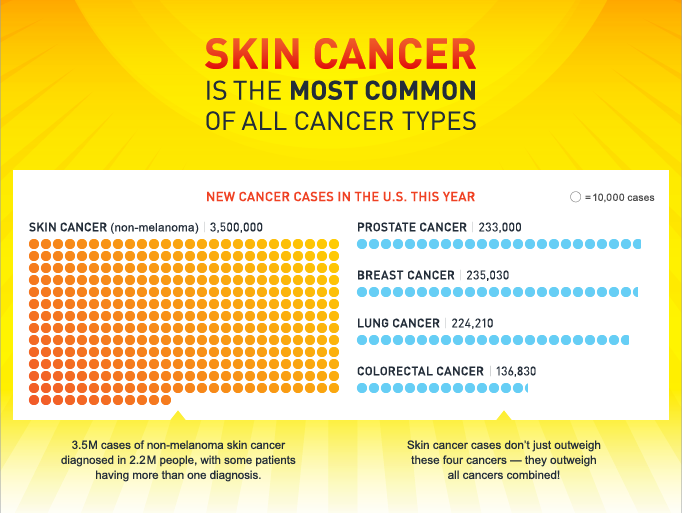 The incidence of melanoma has been reported as increasing in the United States. In Arizona, melanoma incidence rates from 1999 to 2001 were reported as also increasing, but at a slightly higher rate than for the United States as a whole (2). However, in a 2005–2007 report, the incidence rates for melanoma were 30% lower for Arizona men and 21% lower for Arizona women than the U.S. average (3). Reasons for this change in trends are not known, but it is suspected that under-reporting of skin cancers by clinics, hospitals and physicians may be partially responsible for the decline.

In Arizona, cancer data management is the responsibility of the Arizona Cancer Registry (ACR). In 1992, reporting of all cancer cases, including melanoma, by hospitals, clinics, and physicians became mandatory. The ACR is a passive registry, meaning that ACR personnel do not actively visit pathology laboratories or health provider offices to identify and abstract cancer cases. Instead, the registry relies solely on providers sending appropriate report forms to the ACR. Cancer incidence rates are calculated from data maintained by state cancer registries, and these data are highly dependent on the actual reporting of cancer cases from community sources, including physicians. The potential for underreporting can be especially high with melanoma, as it is frequently diagnosed and treated in outpatient settings.

In 2012, because of concerns that the observed drop in melanoma incidence in Arizona represented under-reporting rather than real change, an ad hoc statewide public health partnership (The Arizona Melanoma Task Force) was formed to assess the degree of under-reporting of melanoma, identify barriers to reporting by providers, and recommend strategies for increasing reporting. The work of the Arizona Melanoma Task Force demonstrated high levels of under-reporting of melanoma to the ACR, particularly for in situ and locally staged tumors. See the full research study here:

The latest reports show the increased amount of melanoma cases in Arizona compared to the rest of the United States.

These reports can be found at the ACR website.

The Task Force continues to meet regularly to assure that reports to the practices continue and to evaluate new reporting methods. Physicians and practice staff members appear to have a strong desire to increase the technology related to reporting. As new technologies become available, the Task Force members will review their impact. The Melanoma Task Force reports annually on current melanoma rates in Arizona.

Find the latest on AZ melanoma incidence and reporting here.